It seems like every new Lego set is a little bit cooler than the last, doesn’t it? And the newest Jungle Sets, a sub theme of the Lego City sets, are no exception. With the introduction of a slew of new animals, an oversized Venus fly trap reminiscent of “Little Shop of Horrors,” and the introduction of a new accessory, the “Lego machete,” these sets are sure to capture your child’s imagination. They certainly caught my daughters attention, and mine if I’m being honest! Check out my review of the Best Lego City Jungle Sets to learn all about the latest and greatest additions to the Lego family.

Ride through the jungles of Lego world on a buggy operated by an adventurer equipped only with a machete, binoculars, and his wits. The mission is to find the treasure tucked away in an ancient statue, but beware the spider guarding it!

The Jungle Buggy set serves as a sort of gateway into this new line of products. As far as Legos go, this isn’t the most intricate of sets but the contributions that it lends to this new theme are notable. The buggy is definitely cool, and you’ll certainly need the accompanying machete-wielding mini-figure to help carve a path through this jungle theme.

On the banks of Lego City’s jungle river, crocodiles lurk, frogs leap, and snakes slither at your feet. Your explorers bravely navigate the tumultuous waters on an awesome boat, equipped with binoculars, a camera, and a functional magnifying glass. There is treasure hidden somewhere, but with a slew of animals to contend with, your explorers will need to keep their wits about them if they are to find it. 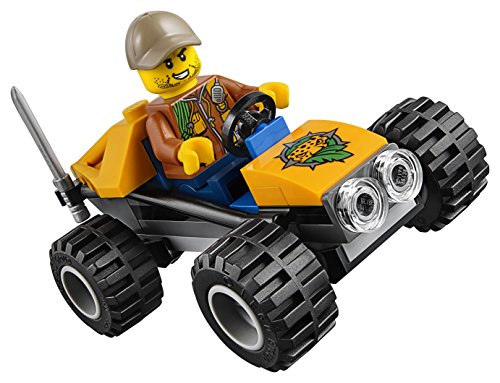 For those with an interest in Lego’s animal collection, this 88 piece set is without question a must have. With three mini-figures, it also goes a long way in populating your jungle with explorers. After all, without them, who is going to uncover the treasure hidden in every set?

Navigate through the dense trees as a passenger of a powerful helicopter to spot the hidden treasure from up above, then deploy your second adventurer on the ATV to go and find it.

The Jungle Cargo Helicopter set takes your explorers to the sky, where they can zoom around and swoop donw for hours of fun. With the addition of two awesome vehicles, this set is certainly exciting, and at 201 pieces, your child (or you, for that matter) will be occupied with the building alone for a good while.

Deep within Lego City’s jungle, your explorers find themselves at the precipice of a temple, about to embark on a tremendous adventure. To find the treasure within the walls of the ruins, your explorers will need to contend against a panther that guards the jewel. Luckily, they are well equipped with a massive truck for excavation, and an ATV they can use to quickly survey the surrounding area.

The addition of two more awesome vehicles alone is enough to make this set worthwhile, but I am particularly taken by the introduction of the Panther. The jungle just isn’t the jungle without great cats, making this set a must buy.

Branches crack and bushes rustle in the wake of your massive jungle mobile lab. Mounted to the top of your vehicle is a canoe, perfect for the lake that you have just found. You pull over into a clearing, and explorers pile out of the car. Across the body of water, a beautiful water fall roars in the distance. Next to it lies a temple with treasures to reward those brave enough to explore it, but stay on your toes. The treasure is guarded by a man-eating Venus Flytrap, and a crocodile.

At 426 pieces, this set has a lot to offer, but I am partial to the oversized fly trap. Perhaps it is the “Little Shop of Horrors,” fan in me, be whatever the case I think it will make a great addition to any collection, and the jungle aesthetic components of this set are also a huge plus.

The Lego forest is hiding a mystery, one only your young explorers can uncover. There’s been a plane crash, and they must set out with all available resources to go and investigate it, but when they arrive on the scene, they find more than they bargained for. Near the wrecked plane, your legion of seven explorers uncover the ruins of a temple, guarded by a Venus flytrap, a crocodile, snake, and trap boulder. Even equipped with an amphibious helicopter, and two trucks, your explorers will have their hands full. Jam packed with features, this 813 piece set is sure to keep your children entertained for hours on end.

Personally, I like the storytelling element present here, and with the inclusion of the leopard and yellow frog exclusive to this set, I would say that this makes for a very compelling buy.

The final set we will be looking at is also the most intricate. Your explorers have set up a base camp to explore the surrounding jungle. A helicopter sits in the clearing, it’s blades still spinning faintly in the breeze, while experts load a boat, attaching motorcycles to a rear hitch. Just outside the camp, a rickety bridge leads to a hidden temple where the treasure is waiting to be found. But even with all your incredible resources, explorers will need to be careful, for in the shadows lurks a tiger, a crocodile, and a Venus flytrap big enough to swallow a person whole.

If you are only going to buy one set, I would have to recommend it be this one. Loaded with features, this set will go a long way in giving your Lego collection a jungle feel. This set also benefits from being the only place to get the exclusive tiger figurine, making it a very worthwhile buy.

Personally, I think every single one of these sets is pretty cool. Which ones you ultimately end up taking home will probably depend on your price range, but I can say very confidently that any of them will be a welcome addition to my personal collection.