As of the past few months, Disney’s new streaming service; Disney+, has taken the world by storm with its massive collection of classic Disney movies and television shows, heading a new approach to Disney’s marketing and audience.

Produced by Dave Filoni and Jon Favreau to coincide with Disney+’s launch, ‘​The Mandalorian​’ surprised Star Wars and non-Star Wars fans alike with its nostalgic and lighthearted charm. The plot centers around the Mandalorian and his adventures as he works as a bounty hunter for the Bounty Hunter Guild on the planet Nevarro, eventually encountering The Child.

And so, piggybacking on the popularity of ‘​The Mandalorian​’, LEGO has released another installment within the Brickheadz line featuring the Mandolorian and the Child in figurine form, featuring a number of interesting design and technical elements and aspects. 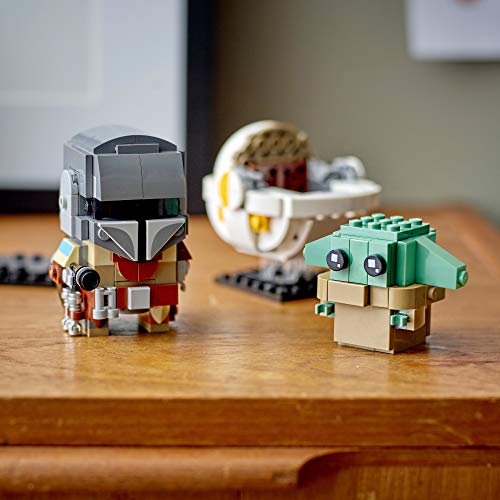   From the mismatched dark brown and beige color of the knee and shoulder armor to the gadgets and canisters carried around the legs and utility belt, the Mandalorian Brickheadz includes great attention to detail. The figurine accurately represents and captures the hodgepodge aesthetic of the Mandalorian’s design with his signature pistol, disruptor/sniper rifle, and black cape.

  Aesthetics aren’t the only ace up LEGO’s blocky sleeve, however. The construction aspect of the Mandalorian Brickheadz is unique in the fact that instead of the technique employed on building Boba Fett’s Brickheadz helmet, LEGO has come up with a rather interesting one for building the Mandalorian’s.

In order to line the lower part of the helmet, there are two individual parts; the lower-left half and the lower right half. These pieces are placed against each other on opposite sides and in a “hanging” position. The upper helmet is then built on top of the lower portion in a natural-looking way.
  
 

One of the only flaws in the Mandalorian Brickheadz is on the cape. Located there is a 1×1 light gray claw piece on top of a 1×2 light gray circular piece to hold the disruptor/sniper rifle. This would not be a nitpick if LEGO decided to use the black color that was chosen for the entire cape instead of the light gray that stands out, as well as the fact that the 1×2 piece does not fit well with the arching at the top of the cape.

This might be a design choice for easier visibility to kids or unlikely a minor detail overlooked by LEGO. Either way, the parts are available in black and can be easily replaced.

 Another nitpick is the color of the helmet, which could have been metallic gray instead of the dark blueish gray used. Since the helmet is chrome-ish in the show, this would have been more accurate.
 
 Taking up a big portion of the set itself, the Child’s hover-pram is almost like building a third Brickheadz. The hover-pram includes a color of yellow-orange found rarely in a few other sets. Interestingly enough, however, is that even though most Brickheadz are similar sizes to each other, the Child is still smaller in comparison to Yoda, a small but very nice detail to proportion. Even with the standard Brickheadz eyes, ‘Baby Yoda’ is even more adorable in brick form.
 
  
 This set is well worth the content inside with 295 pieces.
The Mandalorian’s ship, the Razor Crest, will be available on September 1st, 2020.

Considering future sets, LEGO could release a Brickheadz variant of the Mandalorian with his upgraded Beskar armor that he acquires later in the show along with the ex-rebel shock trooper Cara Dune, Kuiil, or IG-11. Will a Jango Fett Brickheadz come soon following two Mandalorians? The possibilities are endless.