Recently, I went to see the hottest movie in town – Captain Marvel, as it is pretty much the appetizer to the main course – Avengers: Endgame. Surprisingly, and by the looks of it, Lego will only have 1 tied in set. 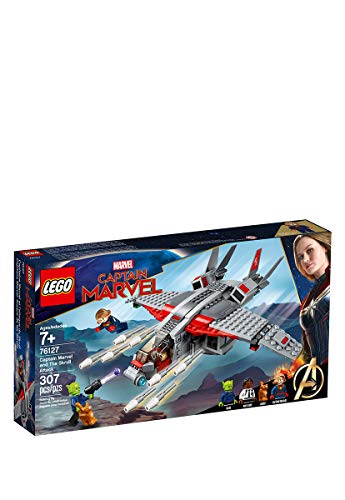 That makes me wonder, how come just one set? Could it be that Lego has placed its get sidetracked, let’s shift gear and talk about set 76127 instead.

Last year, in the second movie trailer for the Captain Marvel, a younger version S.H.I.E.L.D director Nick Fury – alas Agent Fury, asked Captain Marvel: “You know how to fly this thing? … That is a yes or no question”, we got our first glimpse of that “thing” – a light grey, older version Quinjet!

The last few Quinjets (excluding polybags) are of a bigger size, in a bigger set, and at a higher price point:

This time around, Lego decided to make this new addition quite a bit smaller, scaled down (both parts-wise and playability-wise) and at a more affordable price point of MSRP $29.99. In this set, you get the following minifigs – Captain Marvel, Agent Fury, Talos the Skrull, and last but not least – Goose the cat.

By comparison to the previous Quinjet sets, it is true that for this set, you get exactly the Quinjet (prototype) only, no extra vehicles, no additional building structures, no additional Superheroes. But remember, for a young kid, that $40-$50 savings is a big deal – the difference between an OK and No Way from mom or dad – a blessing in disguise indeed!

My take on this set: The lower price point is definitely a plus – less dough, quicker build and more time to play and on top of that, you get most of the main characters from the movie in one set! Only gripe….Goose should be of a different color/printing…and where is the Tesseract?