Everyone knows that ninjas have earned their reputation for awesomeness through physical prowess. A proficiency at kicks, flips, and sword fighting is certainly enough to impress most people, and more importantly, it’s enough to take down all but the fiercest of enemies. Unfortunately, as the ninja Jay is learning, defeating some enemies requires a little bit more than a well-placed punch. Find out from our review of Ninjago movie Lightning Jet Set:

Ed and Edna have been kidnapped by the evil shark army and it is up to Jay to rescue them from the jaws of peril. It won’t be easy: the opposing forces have come well prepared. Well-armed thugs wait to stop Jay in his tracks, but what he really needs to look out for is the crab suit. 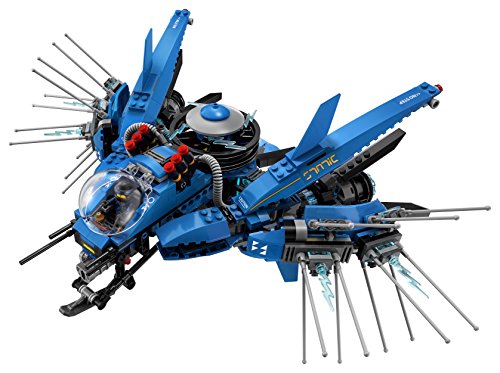 As a ninja, Jay has had enough combat training to stare down the shark army thugs with confidence. However, no amount of training could sufficiently prepare him to face the four six barrels of the crab suit’s guns, nor the mechanical jaws mounted to the machine’s side.

A fearsome opponent requires an equipment upgrade. That is where the Lightening jet comes into play. Soar into combat in an innovative fighter jet loaded with weapons that will help Jay to level any threat with ease. 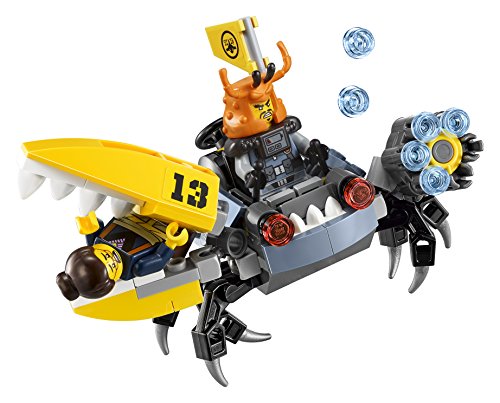 Fire away with the jets cannons, or build up enough energy to launch a powerful attack from the vessels rotating electro disc. When you feel confident that you’ve taken out all your enemies, spring from the cockpit and rescue Ed and Edna.

Just be sure to keep your wits about you. The Shark Army is known for their resiliency. Stay focused and remain on guard: their leader Crusty is still out there, and he and his fish chainsaw are waiting for you.

All About Lightening Jet 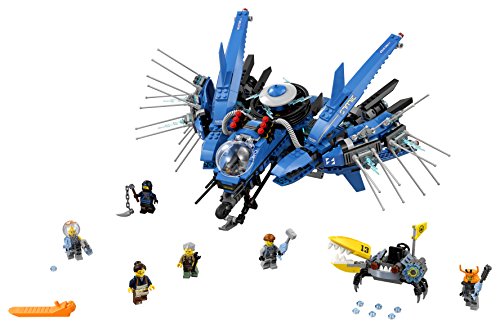 One of the handier features of the Lightening Jet, however, is the handle attached to the bottom. The handle is designed to allow your kids to play with the jet easily without damaging the configuration. At eight hundred and eighty-seven pieces this certainly isn’t the largest Lego set in the world but it is also more than you want to have to clean up because it wasn’t handled properly.

I also appreciate the addition of the crab suit, which is in and of itself something of a bonus vehicle. While it isn’t nearly as big as the jet, it does have enough weapons to be formidable, and the design is also attractive. Its inclusion in the set is a perfect opportunity for multiple children to play at once.

The Lightening Jet itself is detailed enough to earn a prime spot on your shelf of choice Lego designs (if your house is cool enough to have such a shelf, that is) but it is also optimized for play. It features a built-in handle that will make it easy for your kids (or you) to play with it. The set also comes with a plethora of ninja weapons, as well as six mini-figures that will keep your Lego collection well populated.

What is the LEGO Ninjago Series?

If all of this sounds foreign to you it is probably because you have never heard of the popular Lego franchise, “Ninjago.” Ninjago started as a kid’s television show years back and has now found itself a role in Lego’s thriving film franchise with a new movie being released this year.

The show and the film both feature copious amounts of action seasoned with healthy doses of silly but sincerely funny humor. The tone makes for an interesting watch, and more importantly for our purposes, a really fun filter through which Ninjago can be role played from the comfort of your home.

While the Ninjago series is cool, you definitely don’t have to be a fan to love the Lightening Jet set. The vehicle itself is loaded with weapons such as guns, missiles, and even a rotating electric blade that is sure to capture your children’s imaginations.

If you are a fan of Legos and you like the idea of a ninja piloting a sci-fy fighter jet (my assumption is that everyone is going to like that idea) this is definitely something to consider. Whether you are a fan of Ninjago, or just good Legos, the Lego Lightening set will make an excellent addition to your collection.

The Lightning Jet looks really impressive, and will be very fun to build.