The First Order Transport Speeder Battle Pack 75166 is a new set release for 2017, based on the Star Wars: The Force Awakens movie. It’s going to be a must-have for anyone who’s a fan as it includes three Stormtroopers and a First Order officer. The previously released First Order battle pack had just one standard Stormtrooper, so this is a big improvement.

It also lets kids and their friends play together as there are plenty of mini figures to go around. Let’s check out this latest set and see everything it has to offer. 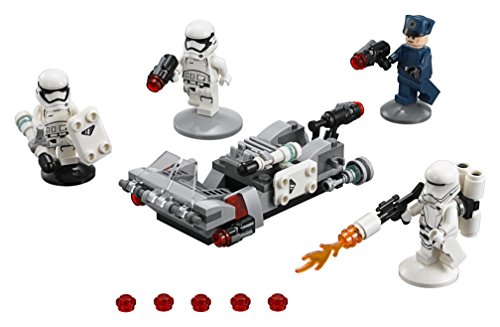 The First Order Transport Speeder isn’t actually seen during The Force Awakens movie, but it is similar in design to other First Order vehicles. It has a rather sturdy look when viewed head on, and an angled windscreen to give it a multi-dimensional design.  The cockpit has a printed control panel and has enough space for a pilot mini figure.

There are also stud shooters on either side, and a shooter on the back that can be rotated. The open downside is there are no wheels or sliders on the base, which can affect how it’s played with. However, most kids will love making it soar through the air, so it shouldn’t be a big deal.

The First Order Transport Speeder Battle Pack 75166 Lego set comes with two standard Stormtroopers, a Flametrooper and a First Order Officer, both of which can be used to create endless battle scenarios.

The Stormtroopers have molded helmets which are pretty much identical to the ones seen in the movies, and they have printed details on the torsos. They also come with riot gear, which can be stored behind the pilot in the cockpit of the speeder. There is a riot baton and a shield, which children can use to attack the enemy.

The Flametrooper has the clone trooper head and a molded helmet with a small visor. The torso and legs are full of printed detail, which is true to the representation in the movie.

The First Order Officer has a dark blue uniform, and cap. The cap has a First Order insignia printed on it, and he has a stud shooter weapon. 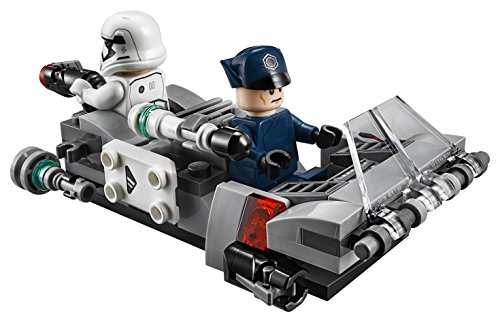 Kids can get hours and hours of play out of a Lego set, and use their imaginations to create whole worlds. For example:

The Officer had told the troopers to load up, and he waited at the controls of a transport speeder. The Flametrooper lifted his flamethrower, and boarded, watching two Stormtroopers loading up riot gear. The Stormtroopers struggled with the shields and batons, until the First Order Officer barked at them to hurry up. They threw the gear in the storage compartment, and jumped on. The officer started up the speeder, and told them to hold on. They were going to take the fight to the Rebels. Check Other Best Star Wars LEGO Sets Here.

The Speeder itself has a great build design, but it does lose some playability because it doesn’t move as smoothly on surfaces as some of the other Star Wars vehicles do. Although, it’s really collectible, and collectors will be looking at it as a way to increase their armies of Stormtroopers, rather than for the vehicle design.

Younger fans, too, will probably want this more for the mini figures than the speeder itself, so it is absolutely worth buying.

The Speeder itself has a great build design and it's a good bargain.