Marvel’s “Black Panther,” looks poised to shake up the cinematic comic book universe in an exciting way, but perhaps even more exciting is what it means for the world of toys. That’s right, a new Marvel movie means only one thing: new Lego sets!

While it is a little bit disappointing that there are only two tied in Black Panther Lego sets, these sets that we have been given are pretty awesome.

Let’s dive right in and take an in-depth look at these two wonderful sets to see if they are worth adding to your collection.

The 358 piece Royal Talon Fighter Attack is a pretty loaded set that comes with four exciting new minifigures; Of course, Black Panther himself steals the scene, but owners of this set will also enjoy the opportunity to play with the new body guard character named Nakia, as well as brand new villains Killmonger, and Ulysses Klaue.

Of course, the minfigures aren’t all this set has going for (although they definitely will make for an exciting addition to just about any collection)!

What really makes this set so special is the Royal Talon Fighter plane that has been featured heavily in the promotional movie trailers.

The Royal Talon Fighter is actually a vehicle that will make for a pretty good toy for kids (or kids at heart) to play with once the set is assembled. The jet even has a fun projectile component that will allow users to “fire at will” as they play with their new Lego set.

It’s just a great vehicle that will make a pleasing addition to both dedicated collectors of Lego, and fans of Marvel alike.

Perhaps my favorite component of the set is the way in which it empowers owner to role play scenes from the movie.

With this set your children will be able to re-enact their favorite scenes from the film in a way that they never could without it. Upon completion of building the vehicle they will be able to soar through the skies of the Marvel universe in style as the powerful warrior king of Wakanda, defeating villains with the help of futuristic technology that could only come from the pages of a comic book.

Personally, I think of this as a set that speaks to the kid in all of us. It’s great fun, and it also offers fans a chance to connect on a very interactive level with another spectacular Marvel film.

In addition to the tremendous role playing element, it also happens to be a visually appealing, gorgeous fighter plane. In other words, whether you are someone that loves to play with Lego, or someone that is an avid collector (or both!), you are getting a set that is perfect for your needs. And, of course, it will also make a great toy for fans of Marvel in general!

A final point to mention about the Royal Talon Fighter set is that, with its good looks, Lego had set this set at a reasonable price point, a pretty affordable MSRP of USD $29.99! If you want a great set of Lego that won’t bust your budget, this is definitely the set to consider.

This next set is also pretty awesome. Like the last set that we just looked at, the Rhino Face Off by the Mine set is inspired by the Black Panther movie and gives fans the opportunity to get in on the action of the movie from the comfort of their own home. 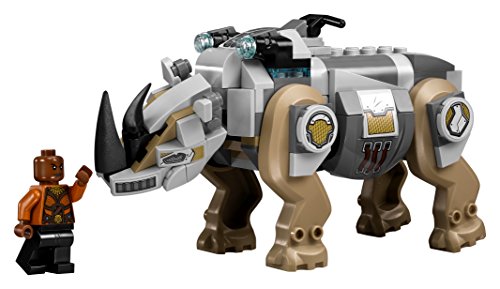 This particular set comes with 229 pieces, and three minifigures. You will get a different version of the Black Panther and Killmonger figures, plus another body guard minifig – Okoye, which is exclusive to this specific set.

The set gives you the ability to assemble a brick-built armored rhino, as well as a mine car and roller coaster rails. Additionally, there are also pieces that represent Vibranium, an element that plays a key role in this Marvel film and beyond.

For your money, you also get plenty of stickers, and an “explosion” function that makes the rail car tip over on the functional rails.

It’s another fun set that looks cool and has plenty of play potential. If you are a fan of the Marvel Universe and SuperHero Series, this set is going to be a must have, and it also happens to be the most affordable set of the two.

If you want a good balance of pieces and minifugres, for an affordable price, you couldn’t go wrong with this set.

So, what’s the verdict here? These two sets are affordable and fun to build. The designs are beautiful and full of both playable and collectible potential. However, these are smaller sets, more like appetizer sets. Will there be another wave of Black Panther sets, bigger and grander “main course” sets, or even a Black Panther Brickheadz series after the movie release?

They are affordable movie sets in bricks.