The Rathtar Escape 75180 Lego set is based on a scene from Star Wars: The Force Awakens, and is part of the Summer 2017 wave of Lego releases. In the movie scene, Han Solo and Chewbacca are stuck between the Guavian Death Squad, with Bala-Tik as a negotiator, and the Kanjiklub, when Rey and Finn hit a switch and release the Rathtar, which lets Han and Chewie escape. The Ervana is great for kids to build thanks to its versatility, allowing for hours of exploration and the Rathars are creepy but cool; and lots of fun.

The main build is a section of Han Solo’s freighter ship, The Eravana. It has three mini sections, which can be built in different ways and shapes, for a host of different designs and play scenarios. It has an operational yellow and gray security door that opens and closes with a lever. But the star here is a secret trap door; the trap door has a wind-up mechanism, so any mini figures underneath can pop up.

There’s a passageway that runs underneath the whole set that Chewbacca and Han Solo can use to try to escape and there is also a Rathtar cage and two buildable Rathtars. One is red, and the other is black, and both have tentacles and long wicked looking teeth. They are just as creepy here as in the movie!

The Rathtar Escape 75180 set has five mini figures, all of whom are seen in this scene in the movie. 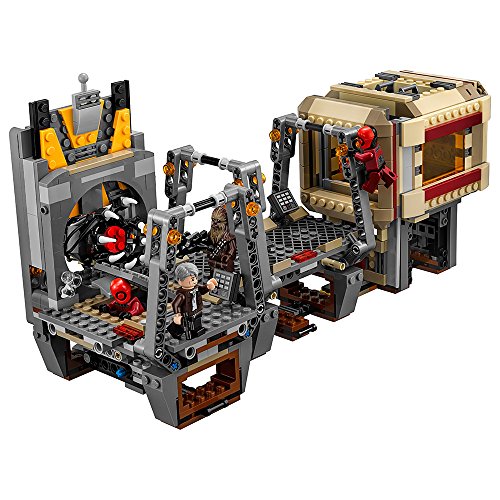 This older version of Han Solo has been seen in other set releases based on the movie, but not many, and not at this price range. He has gray hair, and he has printed detail on the torso and legs. He comes with a blaster weapon.

Chewbacca has also been seen in previous sets, and he has a stud launcher bow caster. 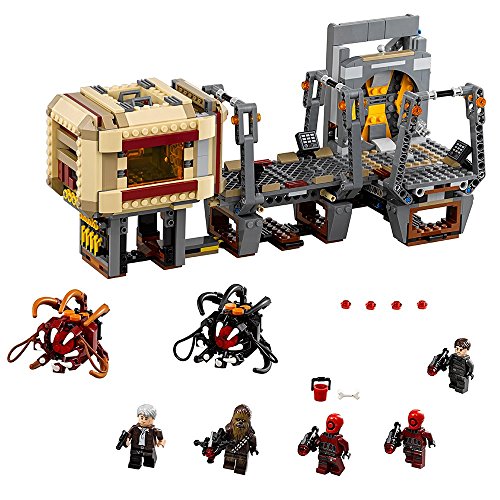 The set comes with two Guavian security soldiers or Guavian Enforcers. They have red torsos and legs, which have printed details, and a red headpiece. They are armed with stud launchers

Bala-Tik has not only never been represented in Lego but in any toy form. He has a brown hair piece and a stubble headpiece. He has detailed printing on his legs and torso, and he comes with a stud launcher.

Kids love creative play, and Lego encourages them to let their imaginations fly. For example:

Han heard the Rathtar move behind him as both the Guavian security soldiers, and Bala-Tik threatened him. He nudged Chewbacca, and they began edging down the corridor. They ran for the trap door, as one of the Rathtar wrapped a tentacle around one of the Guavians. Chewie ran through the security door, with Han following him. The door began to close as they got through. Han turned just in time to see the door close on one of the Rathtar’s tentacles.

The scene in the Star Wars movie that this set is based on is really exciting, and the set will become a firm fan favorite because of that. It’s also one of only a few ways to get the Han Solo minifig of an older Han. It’s great to build, and I really like that the Rathtars are buildable, rather than being a whole piece. However, there are some minor drawbacks.

Firstly, the set shows a red Rathtar and a black Rathtar, but there was never a black Rathtar in the movie, so its inclusion here is odd. Secondly, the scene featured both the Guavians and the Kanjiklub, but only the Guavians are in the set. These are really minor issues, and in terms of play value, and collectible value, this set has both.

See how you can escape too.